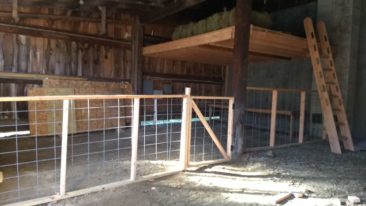 Our goat barn…We may have gone overboard.

There’s a pretty good chance this post contains affiliate links.  This means if you click them and purchase, I get a little coin in my pocket.  Don’t worry, it doesn’t cost you anything extra.

As I write this, our goats are getting knocked up on their current homestead, so it’s going to be another week or so before we can bring them home. <sigh>

But before you bring your goats home, you gotta have a place to shelter them. We are very fortunate to have a 30×30 lean-to on the back of a large garage that we can house them in.  We aren’t the kind of couple that insists on everything being as grand and fabulous as humanly possible, but we are the kind of couple that wants a space that best benefits our goats. If it comes out attractive as well, that’s a plus. And I think we achieved that. We also have visions of one day either having a farm stay or having field trips from schools as our little homestead expands. And we want people to see a clean attractive homestead.  While we still did this for not a whole lot of money, we do think compared to a lot of goats shelters or barns that we’ve seen, this is more like what we had envisioned. Or rather, what my wife had envisioned. I was going slap a few pallets together with some leftover shingles and call it a day.  That idea went over like a pregnant pole vaulter.

So after much hemming and hawing, we (finally) decided on how we wanted it laid out. 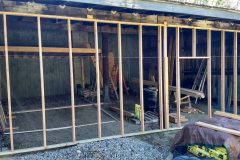 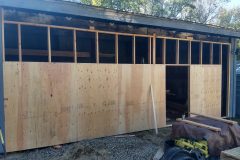 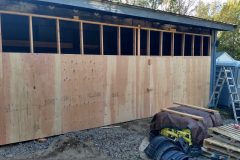 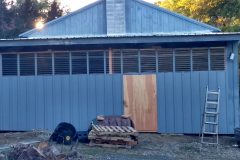 First, we enclosed the whole front of the lean-to. Basic framing covered by plywood. We didn’t have the money to do the board and batten like the rest of the garage, so I faked it and used furring strips to simulate batten. If you’re looking for it, you can see it’s not the same as the sides, but at a glance, it’s convincing.  The top of the wall is clear polycarbonate corrugated roofing that we put up to allow as much sunlight in as possible since there are no windows. Because windows are expensive! Holy moly I almost spit my drink out when I saw what Lowe’s wanted even for small windows! This cost us approximately $120, and it lets in way more light than a couple of dinky windows. I just fastened them to the studs and ran a fake batten up along each stud. I think it came out looking pretty good! 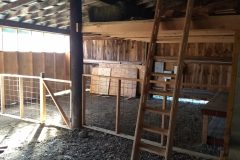 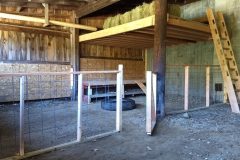 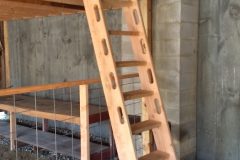 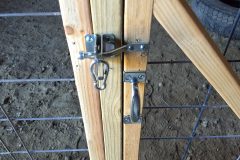 We split the lean-to right down the middle to make a fairly large pen, approximately 13×27.  For the pen wall, we framed a basic half wall and I stapled cattle panel on the inside. I mention that because I somewhat stupidly thought about attaching it to the outside of the wall initially. But then I thought, if they get to rubbing on that cattle panel or pushing too hard, it wouldn’t take a whole lot of force to push the staples out. So make sure that your fencing goes on the inside of whatever you’re fencing in. Now, of course, I wasn’t able to bring the cattle panels back home in their original 16 fit lengths, as I only had a pickup at the time so they got cut in half.  That also meant that they didn’t run the entire length of both sections of the wall.  I did my best to cut them so they would join up properly, and I tack welded each wire back together. You can see in the pictures some of the panel openings aren’t exactly symmetrical anymore.  So if you have the ability to bring home your fencing in full panels, do it. Or you could use rolled fencing. I had considered using rolled fencing but I wouldn’t be using it anywhere else, and as far as I can see they only come in 335-foot rolls. But if you’re going to be installing some permanent fencing, that might be the easier way to go.

Against the back wall, we made a hayloft, approximately 13×13.  There’s nothing really special about the hayloft, except I figured having a lower ceiling for the goats to sleep under would keep them warmer. I’m not sure if that’s true or not, but that was my rationale. I’m told from the homesteaders we’re purchasing the goats, that there is no heat in their current barn, and they’ve been just fine during the winter. And last winter, we had some very cold nights. Down to -10 Fahrenheit with the wind chill.  I know, I know, that’s T-shirt weather for some of you, but in Connecticut, that’s about as cold as it gets. Maybe my hypothesis is right, maybe not. Or maybe, just maybe I might put a thermometer in there during the winter to see if it stays any warmer.  The wife wants to put up a string of those Edison LED bulbs underneath the loft to give them a little extra light during the winter months, which I think is a very good idea. If for nothing else, a little ambiance wouldn’t be bad while we’re milking the goats during those dark winter months.

We had originally planned on a full staircase leading up to the loft. But then we decided that that would take up too much room, so I was just going to bolt an old aluminum ladder to the side of the loft to climb up.  By the time my wife got to the second rung, she nixed that idea.  So I remember seeing a type of ladder on Pinterest (Yeah that’s right. I love Pinterest. Follow me here.) that would fit the bill.  Well, wouldn’t you know it, I forgot to pin it. It took me two solid days to find another image similar to that one that I remember. Come to find out, it’s called a ship’s ladder. And while I can take credit for finding the image, I can’t take credit for building it. A carpenter I’m friendly with put it together for us in a couple of hours.  Geometry has never been my strong suit, so it would have taken me two weeks just to figure out the angles.  That’s a lie. I would have completely given up on the project and it never would have been completed.  It’s quite possibly my favorite part about this goat barn.  And while it was very stable on its own, I wanted to secure it to the hayloft. I happened to be looking up at the rafters while I was on the hayloft, and saw some ties holding them to the crossbeam. These things would be perfect for securing the ship’s ladder.  So off to Lowe’s I went to search for these things.  Who knew that ties made for rafters would be called rafter ties? One of those moments when you’re like, yeah, I should have known that.  I guess hurricane ties would work as well, but I think they might be more flimsy than the rafter ties. Lastly, I was fortunate enough to find an old workbench for free on a neighbor’s lawn. I thought to myself, these would be great sleeping shelves for my goats! So I went back with the trailer to get the bench.  I got to talking with the owner and come to find out, he has a small herd of Nigerian Dwarfs as well!  He keeps a buck and offered to stud for my girls later.  So a free workbench turned into quite the connection. Funny how this world works, huh?

That’s about it for our goat shelter, and I hope you find this informative.

This site uses Akismet to reduce spam. Learn how your comment data is processed.

This website uses cookies to improve your experience while you navigate through the website. Out of these cookies, the cookies that are categorized as necessary are stored on your browser as they are essential for the working of basic functionalities of the website. We also use third-party cookies that help us analyze and understand how you use this website. These cookies will be stored in your browser only with your consent. You also have the option to opt-out of these cookies. But opting out of some of these cookies may have an effect on your browsing experience.
Necessary Always Enabled
Necessary cookies are absolutely essential for the website to function properly. This category only includes cookies that ensures basic functionalities and security features of the website. These cookies do not store any personal information.
Non-necessary
Any cookies that may not be particularly necessary for the website to function and is used specifically to collect user personal data via analytics, ads, other embedded contents are termed as non-necessary cookies. It is mandatory to procure user consent prior to running these cookies on your website.
SAVE & ACCEPT